I wrote a version of this article for the Carver-Scott Humane Society’s newsletter, Furry Footnotes.  Any time I can write an article and it can be about me and my animals, I am happy.  No hours spent on research!  The newsletter should be online in a month or two. 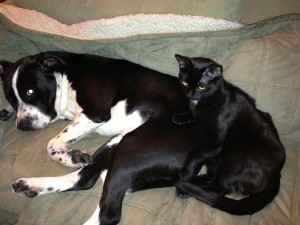 Ever think of fostering, but thought it would be too hard, too much work, or just too daunting?  It’s not all that hard, really; the extra work is minimal, and Carver-Scott volunteers are ready to answer any questions you have or help you deal with behavior or adjustment problems that might arise with the foster animal.

In CSHS’ foster-based program, volunteer foster homes are one of the most necessary components to our mission of rescuing and finding permanent, loving homes for the dogs and cats we serve.   Without foster homes, we cannot take animals who need rescue.

I am fostering a year-old Pit Bull called Buster for CSHS.  I have fostered both dogs and cats in the past, but he is my first Carver-Scott foster.  Taking a dog into my home as a foster was not what I was planning in early December, but life has a way of evolving down paths you never expected.

A year earlier, I had three of my own dogs.  In the space of four months, two of them died: one from extreme old age and the other from hermangiosarcoma, a blood cancer.  It was a devastating period for me, and I was left with one lonely young dog and a heart that would not open up to any new canine companions.  Oh, I looked occasionally, but none of the dogs I saw broke through the emotional barrier I’d erected.

About the time my heart was thawing – a bit – I learned of a dog at 4 Paws Animal Control in Shakopee who had been there for three weeks after being abandoned by his owner when she moved away.  Other dogs at 4 Paws had been claimed by CSHS or other rescues, but still Buster waited.   I took my dog, Luna, to meet him.  She was afraid of all the commotion at the impound, but Buster was just happy to meet us, as he was happy to meet any other dog or person there.  Pit Bulls are often this way, despite the bad reputation they have for being aggressive.

Because the first meeting hadn’t gone very well, on Luna’s part at least, I waited until the next day to pick him up.  I felt bad about making him stay at the impound another night but a happy introduction was more important and better for everybody in the long run.  On her own turf, Luna was her usual self — and elated to have a playmate.  After a couple of minutes of sniffing and worriedly following the newcomer as he checked out his new home, the two were playing chase around my fenced yard.  There’s no way a human can replicate the kind of play that two dogs share, especially when your dog is a hard-playing German shepherd and you are a low-energy kind of slug.

The first few days are always a learning curve, as you and your foster dog get to know one another.  Buster’s house training was an unknown, and at first it seemed to be non-existent.  After being kept in a pen at animal control for so long, I shouldn’t have been surprised that he balked at entering the crate I had for him.  But he came with a built-in great attitude, joyfully playing with Luna, inspecting my cats with the utmost respect and never letting his long white-tipped tail stop wagging.  The house training issue was solved after a few days.  He did that part all by himself.  The crate training thing: we have put that one off until later.  He’s not causing problems in the house, even when I’m not here to supervise, and yeah, it’s unpleasant and I am putting it off.

It’s supposed to be three or four weeks in a new home before a dog will show you all he is made of.  At the four week mark, Buster has gone from a dog who showed signs of separation anxiety, who became frantic if he found himself alone in the house or the yard, to a dog who often is happy to stay outside and play alone when Luna has demanded to be let inside.  He’s gotten a little friskier with my cats, but he only wants to play with them.

CSHS foster homes provide love and care for our dogs, cats and exotics until they are adopted into their forever families.   When you foster, you are doing a good deed, but the animals also do so much for you.   They will love you unconditionally, are thankful for a warm place to land, and in the case of Buster with Luna, provide a free exercise service!