…because my original title, ‘Poetry’, will scare too many people away!

I was never a huge fan of poetry.  Even as, or maybe especially as, a young reader I wanted to devour my reading material, to get through a story as quickly as possible so I could start on the next one.

Having to consider each word was too slow, too time consuming.  I was all about quantity, not quality.  My speed reading habit continued into adulthood. Poems, when read, were like hastily muttered and unconsidered prayers. Words were read but no deeper meaning was attached to them.

It was rather unusual, then, when I submitted a poem for publication and it was actually accepted.  What was most unusual was that I actually wrote a poem and edited it into submittable form.   It was utterly on a whim.  A random, unpremeditated, illogical whim. If I’d thought about it, the idea would have flitted in and out of my consciousness like a butterfly seeking nectar in my garden – now here, now there, now gone.

The Talking Stick is published by the Jackpine Writers’ Bloc; my poem “a glimpse of god in the eastern sky” appeared in their Volume 17.  I assumed that they published anything submitted to them but have since heard that is not the case. 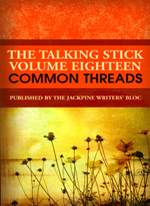 I submitted a poem called “Still” to the next edition and what do you know but that one made the cut, too! I was on a poetry roll but as I do so often when on a roll, I quit.  I didn’t submit the next year, or the year after that.

Why?  No spark of inspiration, no nirvana moment that spilled from my heart into words and onto the page.  A low-level case of depression, more dreary than devastating, first touched me, then surrounded me.  Oh, I was up, dressed and moving about.  I had to be.  The animals wouldn’t let me just sit and stare out the window, but there was no emotional energy in me to write much of anything.  I didn’t even read much for more than a year.

I’m back now and writing every day.  Last week, in preparation for my writers’ group, I tossed off a few lines of mostly non-rhyming poetry so I would have something to contribute.  I trust the ladies in the group so thoroughly that I am comfortable taking fourteen lines of doggerel and reading it to them.  At least they hold their laughter until we part at the end of the evening.

Does that make me a poet? I’ve got two books right here on my desk that say I am one.  I like playing with words and I’m pretty good at cobbling together a few seeds that could grow into full-fledged plants if I gave them a bit of love.  Maybe poetry ain’t so bad, after all.